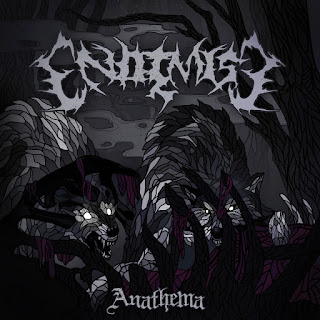 Managing to offer more of the same, Canadian symphonic black/death metallers Endemise have contributed to their main style of attack throughout their career which really brings a new showcase for their grand sound. With a three-year gap between releases that sees Graham Murphy settling into the second guitarist role for the group, their third full-length album was originally released October 28, 2016 on Maple Metal Records.

From the start this here finds itself contained within a fine mixture of the two main genres featured by utilizing a strong display of swirling black metal amidst the predominantly death metal stylings here. Featuring the keyboard-laced symphonics for the most part here with plenty of utterly bombastic and dynamic rhythms that offer the grandiosity typically found here, and then wrapping it all in a truly engaging and wholly appropriate black metal series of stylings that make for a rather impressive contrast. The near-Gothic stylings here with the grandiose drumming stylings and full-on orchestrations add another fine layer alongside the swirling tremolo rhythms and generate plenty of truly enjoyable elements with some fine melodic leanings throughout here, and these leave this one somewhat enjoyable. While these are quite fun, they bring up the album’s main problem here which comes from the fact that there’s just not a lot of really strong and varied series of rhythms throughout here which really tends to make this go by without really finding out where you are in the album as a whole.that lowers this one somewhat. Despite unleashing a strongly-performed album for the most part, there’s just not a whole lot really here to give this much of a coherent style or identity as it’s just not all that dynamic to really make a different impression here. It’s what really holds this one back even with the positive elements.

Though it’s got some positive work throughout here with the strong orchestral elements and some energetic work at times, there’s still plenty of work here that drags this down enough to really leave this one for the most undiscerning fans of symphonic black or death metal for the most part as most others should heed caution with this one.

Does it sound good? Order it from here:
http://endemise.bandcamp.com/album/anathema
Posted by slayrrr666 at 11:54 AM