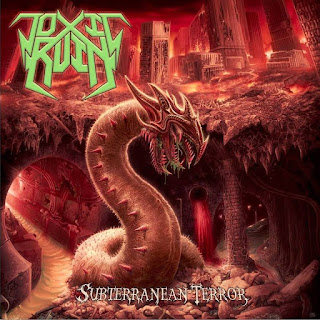 Formed realistically in 2014, Wisconsin-based thrashers Toxic Ruin formed from the ashes of heavy metal cover act The Ruin and took several members of the last remaining lineup into the new harder, faster version of the band. Shifting away from the heavy metal sound into this thrash-based variety, the group is finally able to offer their self-released full-length debut August 11, 2016.

For the main part of the album, there’s very little about this one that displays anything less than a galloping thrash assault. Fully utilizing the bands’ heavy metal past as the framework their riffing style, the band implements more of a simplistic chugging for the majority of the attack which is what makes for a somewhat bland general attack here with the band not really offering up anything overly dynamic or impressive here beyond spindly leads and dexterous drum work which can be found on dozens of others out there. It’s when the band drops that ploy in favor of more furious, charging elements here that this one really picks up nicely as it lets the riffing drop the plodding chug-based rhythms in favor of a more fluid thrashing style that’s a lot more vibrant, full of energy and offers even more twisting, churning patterns here that are far more enjoyable than their plodding mid-tempo style. Unfortunately, this isn’t a dominant factor through enough of the album to really generate the kind of impressive overall feel and tone it could’ve had since the blander stylings take center stage here for far more sections of the album and leave this only to selected pieces of tracks which make it all so frustrating when it features pieces of enjoyable sections on parts of the tracks. Granted, this is far better accomplished in the second half where that takes much more precedence than the first half yet is still a problem on the album overall.

Although there are a few problems found here that come from the album’s really bland sections taking up a rather large part of this one, the fact that there’s enough ravenous work on display to counter that does leave this one to be a rather curious piece worthwhile only for the most undiscerning thrash fanatic.

Does it sound good? Order it from here:
http://toxicruin.bandcamp.com/releases
Posted by slayrrr666 at 11:44 AM