Kingdom (Pol) - Sepulchral Psalms from the Abyss of Torment 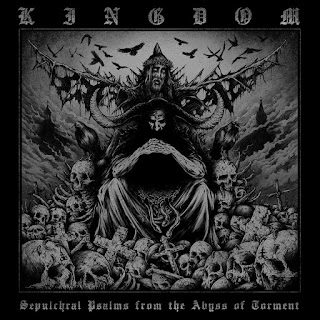 Keeping their old-school sound intact, Polish death metal veterans Kingdom have gained a loyal following for their die-hard adherence to a blackened old-school attack of churning death metal madness. With a three-year gap between records that sees the band employing new bassist STH and being his first recorded output for the band, their third full-length effort is originally released October 30, 2016 on new label Godz ov War Productions.

From the onset here this is quite obviously a grand old-school styled affair which wraps plenty of strong and impressive elements within. The main focus here is on the band's devoutly old-school style attack, from the swirling tremolo-laced patterns that are intertwined throughout here with the lurching, sprawling riff-work at the core of the band’s sound which manage to add a darkened, swampy attack to the slow, sprawling riff-work. This is highly impressive for the most part as this atmospheric displays reeks of the sprawling, deep churning vibe of the old-school scene which is then played at a variety of tempos that alternate from the ferocious up-tempo thrasher to a chugging mid-tempo outburst and a doom-riddled sprawl that offers plenty of crusty elements to the band’s signature swampy lurch with this series of deviations allowing for a wholly well-rounded outcome that gets melded together in competent, coherent fashion. It’s all tied together in lengthy, sprawling numbers that gel incredibly well together as this allows for the album to ebb and flow together while still remaining constant and charging to generate the required liveliness to make for a compelling effort. The fact that this all comes together so well yet still feels way too short is a great effort as well, but does highlight the one minor flaw here in that this does come off like it needs another track or two just to round itself off into a more complete form, as everything here works so well but does feel brief with only eight tracks, albeit seven originals with the fine cover at the end tying this up nicely so it does feel like another track or so would’ve pushed this over the edge what with the quality on display here.

Though this one does feel a bit too short and rather brief overall, the fact that the competency and utterly impressive displays found throughout here overcome that to quite a large degree that it becomes the main element holding this one back from further greatness as it should readily appeal to all revivalist death metal fans, old-school aficionados or most fans of extreme metal in general.

Does it sound good? Order it from here:
https://godzovwarproductions.bandcamp.com/album/kingdom-sepulchral-psalms-from-the-abyss-of-torment
Posted by slayrrr666 at 10:17 AM