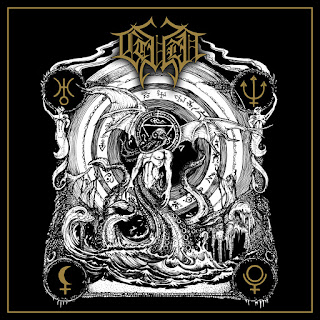 Exploiting their sound even further, German black metallers Ctulu have exploited their dark, depraved sound even further with responses from their previous releases fueling their fire on the new album. With the three-year gap between releases seeing former session drummer Infernal Devastator becoming their full-time drummer, their fourth releases was originally released November 18, 2016 on MDD Records.

For the most part throughout this one it manages to really delve quite nicely through it’s rather tight and frantic settings while featuring plenty of utterly enjoyable work here. There’s a strong elegant simplicity to the album, using a strong series of straightforward riff-work that aggressively switches from swirling tremolo leads to find ravenous thrashing quite often throughout here which makes for a rousing and truly energetic offering which is from the fine mixture here with these coming together into this furious whole. Alongside the energetic offerings, the bands’ trademark slow, deep crawl is still present with the group displaying the same fine mid-tempo chugging series of rhythms here which manage to counterbalance the aggression so well here that when these extended segments come together there’s a fine sense of enhanced energy found in them that it creates a fine counterbalance that comes off in great harmony to the fiery intensity featured much more prominently. This whole approach is very nicely accomplished here with the album generating quite a lot of strong riff-work and rhythms here, and the fact that the album does feel quite a bit shorter than previous efforts does make itself known here as the album’s lone flaw. There’s not a great deal of work within this one that really captures the gravitas and epic feeling of many of their previous albums which makes it feel the shorter running time quite easily with only a few tracks overall and not many of them containing the multi-faceted sections so prominent in their work highlighting this facet even moreso than usual. Otherwise there’s not a whole lot else really wrong here.

Though it’s not quite as grand and twisting in it’s rhythms as many of their other work out there, this one is still such a fine and enjoyable release with so much more positive to overwhelm and outweigh the negatives that this serves as a fine offering for their fans or those into extreme metal as a whole.