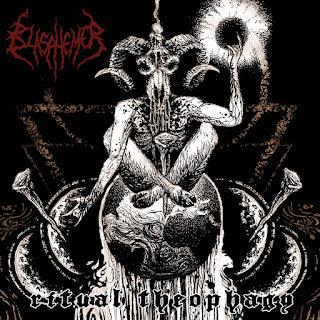 Furthering their finely-honed style, Italian brutal death metallers Blasphemer have carried along their style nicely throughout their career which continues into their newest release with a blistering onslaught of their traditional sound. With an eight-year release gap that introduces Darren Cesca as the new drummer, the second full-length album was released October 14, 2016 on Comatose Music.

Much like their previous works, this one tends to rattle along with traditional brutal death-flavored material that makes for a wholly frantic attack. Featuring flaying riff-work with tight, short patterns and impossibly blistering tempos within their sharply-honed rhythms that strike with jagged precision and frantic speed, there’s a prominently-displayed attack here which is quite fun overall here at delivering the blisteringly brutal rhythms. These are made all the better with their startlingly up-tempo and frantic speeds, as the fact that there’s very little deviation here with a few offerings of more technically-challenging series of riffing that turns their tempos into a slightly more plodding pace that still packs in plenty of charging riff-work within their twisting rhythms. While these here are quite an impressive overall display of attack, there’s a few minor problems throughout here. The album as a whole is quite one-sided and doesn’t really strike itself all that well here with the rather familiar attack that runs itself into the ground here. Running through the same general riffing patterns and arrangements here makes this one a really predictable affair here quite early on, and it’s not really helped all that much with the other minor facet striking this one in it’s too-short length. Only one track here is longer than three minutes and most are kept well under that length which never really allows this a chance to really adapt any kind of identifiable march of signature attack here which is a slight issue to contend with. While the overall attack makes for plenty to like, it gets old rather quickly.

Though it’s really fun in places and does have some enjoyable elements, far too much of this one is caught up in keeping itself tied to that one impressive charge that it really loses itself here once there’s been enough exposure to this one which really leaves this one strictly for the most devout and hardcore brutal death enthusiastic.

Does it sound good? Order it from here:
https://blasphemer666.bandcamp.com/album/ritual-theophagy
Posted by slayrrr666 at 1:26 PM