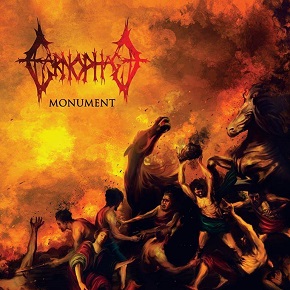 Taking their sound to it’s fullest, Turkish brutal/technical death metallers Carnophage have worked their chaotic brand of controlled musicianship as they keep honing their wildly technical brand of death metal into new heights of extremity. After six years between releases that sees founding guitarist Berkan Başoğlu being replaced by Serhat Kaya, the groups’ second full-length album was released September 23, 2016 on Unique Leader Records.

From the onset here this one really seems to dwell quite heavily in the realm of introducing a strong blend of technicality and brutality together into their music. Taking a more methodical mid-tempo approach to the material by introducing the predominant chugging-style riffing for the most part here while still employing a strong series of tightly-wound and generally controlled patterns that employ the brutal aspects of the music quite nicely. As this fine sense of brutality is matched by elements featuring a charging technicality here with a far more pronounced array of technically-challenging riff-work that manage to vary their tempos and aggression throughout here for a much more pummeling burst throughout the album. That mixture is wholly appealing and quite impactful at times, yet does run into the minor issue of being unable to really offer the deep, churning grooves that would’ve made for a much heavier impact. The album is full of tightly-wound, generally impactful rhythms and riffing throughout here that’s quite well adept at this style, but it doesn’t generate the kind of heaviness needed to really pack the kind of punch of other bands in this style as the album varies only with the tempos of the material present here. There’s never any real sense of dynamics in the recording that gives the material a heavy, thumping burst here with it’s relatively clean production that does capture everything nicely but it comes off too well and really does need more of a mixture here to really work. Beyond this, there’s not a whole lot here that works against it.

Though there’s a bit of a messy situation here with the album not really offering the kind of production that brings out the dynamic sound qualities the music requires, the rest of this is a blistering affair of charging brutality-laced technical death metal that should be quite at home with any fanatic of either style or the genre in particular.

Does it sound good? Order it from here:
http://carnophageturkey.bigcartel.com/
Posted by slayrrr666 at 11:02 AM