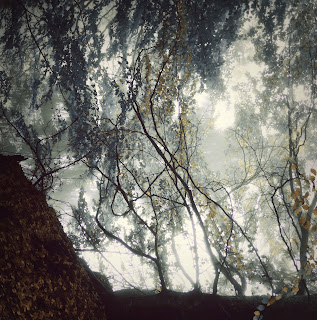 Having adopted their new-found style, one-man Italian atmospheric/post-black metallers Chiral have settled into quite a groove with their switchover to this style after their initial formation as a black/doom project as this allows the band to incorporate more folk influences into the raw black metal. A concept album about the evolution and perception of the perpetual flow of time on men, places and memories, the second full-length album was originally self-released October 27, 2016.

As is to be expected with bands that employ this particular style, the main inference here is on the bands’ atmospheric black metal standings, which are placed at the forefront of the music in grand fashion. Centered upon swirling, highly-melodic tremolo patterns at a constant, repetitive style that sweeps along through the music in here which results in numerous passages of extended rhythms circling around the same central pattern from these arrangements interspersed with instances of fine keyboards and blistering, straightforward drumming that packs a great deal of rumbling double-bass motifs into the music. This ends up replicating the wholesale naturalistic vibe presented throughout that’s commonly associated with this particular subgenre of atmospheric black metal, and with the light ambient interludes placed along the way that bring about plenty of even more melodic intersections with this one managing to gain quite an invaluable degree of slow-burning simplistic rhythms that draw upon their exchanges of atmospheric works to give this quite an impressive outing from the start. At only four tracks, though, there’s bound to be a feeling of incompleteness to the effort as this one really seems to go for a series of the extended swirling rhythms for long periods of time with only a few chances to add to that due to the short running time. It’s really only the main thing wrong with this one otherwise.

Being just a touch too short for it’s own good, that’s the only real flaw for this album as the main factors for it being quite enjoyable and entertaining are much more prominent here which really propels this one quite nicely for fans of droning atmospheric black metal or fans of his past works.