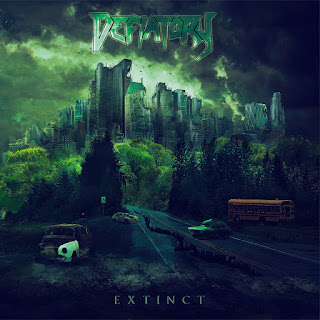 Coming together in 2015, Swedish thrashers Defiatory have quickly settled into a groove of old-school thrash worship that has taken the bands’ love of the genre to it’s fullest with the group quickly finding their full material quickly enough in their career. With the group appearing as a supergroup of the Swedish death metal scene, the group’s debut release was originally released June 3, 2016 on Black Lion Records.

Almost immediately here it becomes apparent that the band is clearly adept at displaying the kind of old school-fueled burst of Bay Area-styled revivalist thrash in grand order. The tight, crunchy patterns and full-throttle riff-work at the center of the music here gives this a generously furious up-tempo thrash-inspired blast of fiery thrash, and with the album going for the generally dexterous leads and straightforward energy there’s plenty of old-school nods throughout the album. Though the album doesn’t generate the kind of variety in their rhythms that effectively recalls that scene to it’s fullest, the riffing patterns utilized here are much more in league with that and really manages to  employ the distinctive crunch barreling along throughout here which is mostly due to the far more vicious and intense patterns featured which give this a far more modern and dynamic effort here which makes the rampaging material quite enjoyable and intense. Though this works quite nicely in generating fiery, frantic material it also causes this to slip into one-dimensional thrashing for the most part here, never really offering up much of anything beyond just admittedly-crushing material without really changing it around and providing any kind of variety. There’s a few spots scattered here but for the most part that lack of real dynamic or varied material does come across here, and although there’s some leeway given here due to being a debut it’s the one issue to be found here.

With only a few minor quibbles to be found here due to being a debut album which doesn’t really hold it back all too much, this here comes off as absolutely enjoyable and vicious modern-sounding revival thrash that will undoubtedly appeal to fans of that side of the spectrum or simply intense thrash in general.

Does it sound good? Order it from here:
http://defiatoryblacklion.bandcamp.com/album/extinct
Posted by slayrrr666 at 12:16 PM