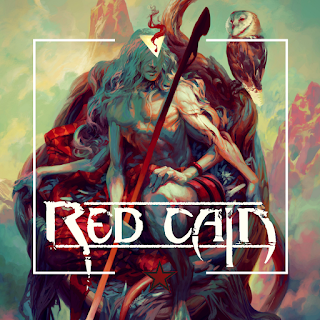 Born as an industrial/gothic act in 2012, Canadian heavy metallers Red Cain quickly moved away from this style into a more melodic metal act inspired by the European acts in the style following the introduction of orchestration guru William Lancaster and multi-instrumentalist Rogan McAndrews into the groups’ core ranks. With the line-up solidified and ready to go, the groups’ self-released debut EP was originally released November 25, 2016.

From the outset, the band sets up a rather intriguing mix of molten progressive rhythms and tons of charging melodic rhythms that make for quite an intriguing and enjoyable time here. There’s plenty of incredibly fun and enjoyable riff-work here with the main focus on driving progressive rhythms that contain plenty of challenging patterns skillfully interwoven with bright melodic outbursts, featuring plenty of tough rumbling underlying rhythms and a sense blend of dynamics throughout here with the intervening symphonic orchestrations providing this one with the backbone upon which the fiery mid-tempo grooves produced by the progressive-tinged riff-work balances out quite nicely. It works as a fine set-up for the bands’ proper introduction here with this one really exploring all facets of their work quite nicely, and with the lengthy tracks allowing for these to come through it gives off quite an impressive feel and tone throughout here though the band still employs one minor piece that does come out here. There’s quite ample evidence here that the group is much more comfortable and able in the stronger, more vibrant sections of their sound and really haven’t tackled the slower, more dragging tempos yet as these are much more of pain to get through when the band stops and attempts to go for the plodding sections that just drag on endlessly and stretching this one out more than it really should, and even this isn’t that bad due to being a debut offering here. Otherwise, there’s not much to dislike here.

With only a minor stumbling block and not even that detrimental of one anyway, the album’s much greater enjoyable factors here with the stronger sense of melodies interwoven with progressive rhythms make this one quite a worthwhile and appealing act to watch for fans of melodic or progressive heavy metal.

Does it sound good? Order it from here:
https://redcain.bandcamp.com/album/red-cain-ep
Posted by slayrrr666 at 10:40 AM