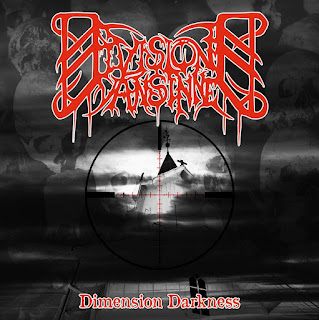 Originally formed in 2008, Swedish black/death metallers Division Vansinne have come together with the idea to keep the old spirit of early 90’s black/death metal alive through their desire to build their work around those old-school aesthetics. With their line-up finally being solidified around mainmanTortureXvidian on vocals and guitars, a returning Likh on bass and Ljusebring Terrorblaster on drums, the groups’ debut album was released September 20, 2016 on Black Lion Productions.

Once the group gets going, there’s a highly prominent and devastating old-school tone throughout here that’s quite prevalent in the different attempts to display their riffing prowess. This is mostly evident in the fact that there’s quite a feverish and prominent outpouring of traditionally deep, churning riffing present that adds a nice selection of tempo variation throughout here, ranging from a series of tight blasting patterns to majestic, sprawling rides. This not only allows for the album to deftly switch styles here but also manages to include the darkened swirling tremolo patterns to the rhythms which is quite impressive and wholly dynamic as a whole that gives this the ability to mesh those styles together into a strong whole so that the darkened, crawling old-school atmosphere gets a chance to be more prominent and present in the overall album’s feel. While there’s a lot to enjoy about this one, there’s the one lone factor here in that the album’s rather overlong length here stemming from way too many tracks dwelling in the  mid-tempo range when it really could’ve stayed more in the faster blasting sections that are far more lively and energetic here. Due to the tracklisting that enables more of these to be featured in order to reach that length, it highlights those even more and leads to a tide of rhythms throughout here rather than a consistent tone, though being a debut offering this is somewhat less of an issue than expected.

Despite featuring a few moments here and there that aren’t all that enjoyable, there’s more than enough elements at work here that is impressive and exciting that it manages to overcome a lot of it regardless of this being a debut that gives this a great appeal for fans of old-school death and black metal as well as fans of Scandinavian extreme metal in general.

Does it sound good? Order it from here:
http://divisonvansinneblp.bandcamp.com/album/dimension-darkness
Posted by slayrrr666 at 12:46 PM