Sepulchral Curse - At the Onset of Extinction EP 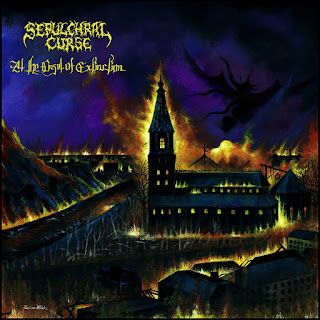 Advancing leaps and bounds, Finnish death/black metallers Sepulchral Curse have not entirely left behind their old school death metal past to incorporate Scandinavian black metal influences, merging it with their irrepressible Finnish brand of death metal. Taking a two-year gap to get the release out, the groups’ second effort is released December 16, 2016 on Transcending Obscurity Records.

As befits their newfound influences, the group displays a rather damaging and utterly impressive attack within here that brings their work together into a cohesive whole. Still raging through the old-school death metal realm, the dominance of the deep, churning rhythms and swirling patterns throughout here keeps this one barrelling forward with the utterly dominating atmosphere that’s helped along tremendously by the mainly furious, up-tempo attack featured. That high-speed attack makes the churning riff-work all the more impressive here, and with the newfound influences of melodic tremolo-picked rhythms that are interspersed along the way it creates a nice balance to these raging rhythms by allowing the tempo to drop into sprawling melodic sections that still retain a dense bite while owning to the charging ferocity displayed. This does strike as a minor point of annoyance as there are only four tracks on the release and it strikes as leaving it wanting more in that regard but as a primer for an upcoming album it’s quite impressive overall.

Without a whole lot of real flaws in the music and charging along with plenty of positive points gleaned from their rather impressive introduction of enjoyable elements to their sound, this is a wholly worthwhile effort for any fan of their past work, old-school death metal fans or the style in general.


Does it sound good? Order it from here:
https://sepulchralcurse.bandcamp.com/album/at-the-onset-of-extinction-blackened-death-metal
Posted by slayrrr666 at 1:35 PM