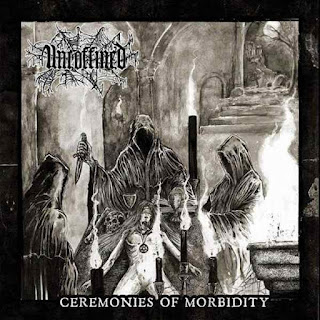 Becoming one of the country’s finest exports, UK-based doom/death metallers Uncoffined have taken the dark and depraved work found in their previous work into a further extreme by drawing even more on the creeping, crawling atmosphere into higher degrees here. With a three-year gap between releases, the group prepares it’s sophomore release October 24, 2016 on Memento Mori.

For the most part here this one plays with the predominantly doom-laced part of their sound for a rather chilling aspect of music that continually churns and oozes with the scalding atmosphere prevalent in that style. The utterly slow, crushing riffing spends an ornate amount of time here readily working through a never-ending series of vile, oppressive rhythms full of these straightforward efforts that take these rhythms into dark passages with the imagery present. As the riffing containing these passages spells out the dark, cryptic atmosphere here with the sound clips edited into here which complement those deep, churning patterns and agonizingly slow, drawn-out rhythms so well by keeping the same consistent atmosphere throughout here. Despite the quality and consistency of the rhythms and atmosphere throughout here, there’s a minor flaw throughout here in that this one doesn’t really offer up much variety or really strike very many creative endeavors throughout here. With the album for the most part incredibly consistent and straightforward in doling out the dark, cryptic graveyard-spawned rhythms here, this one seems to go for these singular style of rhythms here for the entirety of the record so it’s quite easy to lose yourself in the album quite easily with it replaying that here and it creates quite a prolonged, drawn-out feeling here which is enhanced by the extreme length of the songs themselves, but that isn’t all too big of a deal overall here.

While there’s times where it does feel it’s length, especially due to the repetitiveness of the whole affair, the strong darkened atmospheric vibes and utterly pummeling work throughout this one is much more impressive and readily makes this quite an appealing effort for any doom/death fan or horror-centric extreme metal fan.

Does it sound good? Order it from here:
https://www.discogs.com/Uncoffined-Ceremonies-Of-Morbidity/release/9258381
Posted by slayrrr666 at 10:48 AM