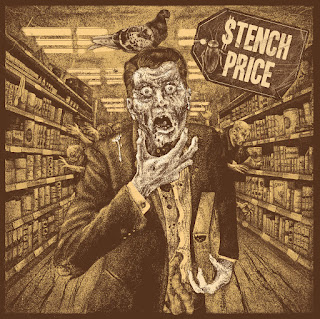 Forming quite recently, international grindcore supergroup Stench Price came through the tireless work masterminded by unconventional Siberian metal eccentric Peter G. Shallmin to become quite an eclectic and unconventional work. Joined by a cadre of guest musicians equally as impressive as the main group, the bands’ self-titled debut was released November 30, 2016 on Transcending Obscurity Records.

Despite the concurrent influence throughout here of rabid traditionally-minded grindcore, what becomes immediately noticeable about the album is the wealth of influences peppered throughout here. Ranging from offbeat and disjointed rhythms that contain quite a wealth of jangled patterns here that become even further into the off-kilter realm by including interludes featuring laid-back lounge rock or glittery bossa-nova sounds. These come off incredibly well-done and create quite an eclectic mix of influences throughout here merging the seemingly disparate elements into a cohesive whole which manages to flow into a tight whole with the ravenous grind aesthetics blaring away in the background with the surgical riff-work and tight, pounding rhythms make for a rather frantic charge that manages to come off quite enjoyable and can still please the ardent grind fans while throwing enough adventurous elements together to create a wholly engrossing experience. The only element that really holds this one back is the fact that there’s just no real narrative feel throughout here by constantly switching up the vocalists for each track which creates such a wildly inconsistent tone and feel that it’s more distracting than the music itself which is quite a feat. Managing to rearrange their music to fit the typical work of their guests is a big mistake overall here and doesn’t really work as the shifts in tone and dynamics become quite apparent that they’re trying to fit these different genres together to match the work of their guests and it doesn’t lead to a cohesive sound at all. Still, that might not be too much of an issue for some and will be able to overlook this one quite easily.

One of the more impressive and wholly original works of art in the genre, a rare feat in itself but to then mix the originality into actually entertaining music makes for an easy recommendation for those who can overlook the minor flaws present and are fans of the creative side involved in the project or those that want a little something different in their extreme metal.

Does it sound good? Order it from here:
https://stenchpricegrind.bandcamp.com/
Posted by slayrrr666 at 9:42 AM