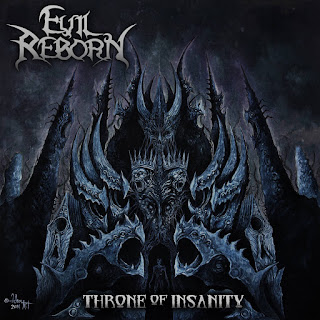 Formed just in 2012, Venezuelan death metallers Evil Reborn have quickly set about taking their love of old-school death metal to their quickly-released first EP before taking a slight gap to deal with their lineup issues. With bassist/guitarist Armando Henriquez departing to let Alfredo Herrera join in on guitar while being the first-recorded output for bassist Jesús Maneiro, the debut full-length was issued as a co-release between Satanath Records and Evil’s Records on May 17, 2016.

Throughout here the group is dependent upon the old-school style of attack here which manages to run through a rather simplistic attack for the most part here. There’s a huge proficiency of deep, churning riff-work on display here which is carried along by the ravenous rhythms present which makes this one all the more tight and intense by making the riffing fly through the faster, up-tempo paces here. With this approach balanced along quite nicely by a hard-hitting, chugging intensity that gives this a charging, vicious attitude that owes to slight influences from the chug-heavy Deathcore scene which strangely still goes along quite nicely with the old-school swirling rhythms, the overall approach and design along the way here gives this one a lot to really like and really offers a lot to really enjoy about this one. This makes for some rather good times here though it does have a rather small factor involved here that brings it down somewhat. There’s a rather strong attitude here that’s really not that concerned with the more prominent death metal aesthetics throughout here as the chug-heavy riff-work keeps this one strangely mid-tempo for the most part. It’s mostly fiery and enjoyable enough, but the pacing here really could’ve been livened up by having more thoroughly atmospheric death metal patterns here, and it really does stand up here as the main issue for the most part.

Though there’s not nearly as much fiery and lively work here that really could’ve exploited the greatness of their attack to the fullest, there’s still more than enough on this one that works well that it becomes a curiosity piece for those who appreciate this kind of slow-churning death metal as a whole or those that enjoy Latin American death metal as well.

Does it sound good? Order it from here:
https://evilreborn.bandcamp.com/album/throne-of-insanity
Posted by slayrrr666 at 3:25 PM