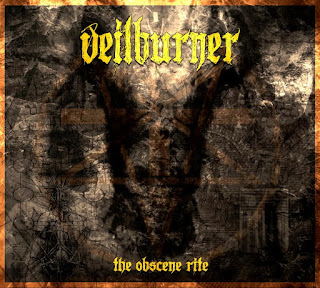 Marking the final part of their trilogy, Pennsylvania black/death metallers Veilburner chronicle their story about the occultist beliefs in transforming beyond mere humanity into a divine godhood by bypassing the notions of control imposed on the masses. Managing to take this lyrical concept to it’s complete end, the duo preps their self-released third full-length part of this trilogy on September 23, 2016.

Following their style quite nicely, the main impetus on the album is a highly-unorthodox variant on black/death metal which comes from their varied and discordant riff-work. This is featured with a strong series of discordant, jangly patterns that are strongly technical with near-progressive tendencies within the arrangements and maneuver within the utterly off-kilter tempos which give the tracks a highly offbeat appearance that’s quite intriguing. Mixed alongside these are some fine industrial flourishes that are full of truly psychedelic rhythms that are fully disorienting yet still all manage to swirl together into a fine mixture of black and death metal with these elements coming into play alongside these strong psychedelic and discordant rhythms. However much fun this approach is, it does present this one with a minor problem that does need to be addressed. This one is indeed quite experimental with it’s progressive-tinged approach and due to this it throws in quite a few elements into the tracks that are quite distracting rather than appealing. With the jangly riff-work and stuttering paces it really tends to develop a constant flow of rhythm changes filled with riffing that’s jarring and quite discordant with twanging arrangements and squealing noises that are highly at odds with the more black/death metal arrangements. This makes them seem to almost go on far longer than they really should with the progressive arrangements making this way quite bloated and challenging to get through with all the different elements coming together that are seemingly at odds with each other. Otherwise, this approach isn’t all that bad.

Despite a minor problem here with this one seemingly quite distracting and jarring for some looking for a more traditional and orthodox approach black/death metal, the fact that this overall approach is quite fun at times does make this a solid choice for more adventurous-leaning extreme metal fans or fans of the bands’ previous work.

Does it sound good? Order it from here:
https://veilburner.bandcamp.com/album/the-obscene-rite
Posted by slayrrr666 at 11:25 AM