Dawn of Disease - Worship the Grave 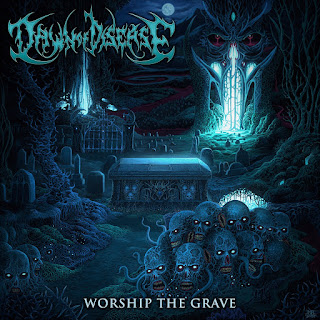 Artist: Dawn of Disease
Release Title: Worship the Grave
Year: 2016
Label: Napalm Records
Genre: Death Metal
Tracklisting:
1. Worship the Grave
2. The Saviour's Tomb
3. Ashes
4. On Trails of Death
5. Prayer for the Dawn
6. Cult of the Fading Light
7. Through Nameless Ages
8. Outsourcing the Brain
9. Enwrapped in Guts
10. The Sky Is Empty

Following the success of their previous works, German death metallers Dawn of Disease have continued to hone their style and skill-set through intensive live-shows while new songs were written diligently throughout this process. Taking a three-year gap between releases, the groups’ third full-length effort will be released on June 24 via Napalm Records.

From the onset here, this one tends to reveal their dedication to the mixture of old-school death metal charges with plenty of impressive Swedish influences that has been present in their work. This one tends to feature a straightforward crunchy style series of riffing that whips along through the generally up-tempo series of patterns and features some utterly dynamic and twisting riffing that’s fully evocative of the rhythms prominently displayed by those groups. That is mixed together nicely with a much more American slant to the arrangements where the typical churning chainsaw-style patterns are replaced in favor of a more agonized, sprawling tone that offers a darker, more vicious bite to them than would be featured in the prototypical measure in that scene which is highly impressive here, especially with the inclusion of some solid melodic lines and harmonies popping up throughout here. Given that inclusion weaving throughout this one, it makes for a great balance of the more aggressive, up-tempo rhythms alongside the lighter melodic sections which gives this one some solid if really formulaic works in this approach. It tends to run along through the rather familiar and pretty similar patterns for the most part which comes from the tracks being in this same tempo and not really given much room for any kind of dynamic variations to off-set these changes. It’s really the album’s one main downfall as the majority of the work here follows the quite tight and explosive work.

Given a few minor and rather unimportant issues to contend with as the album rattles along through quite familiar processes in their particular approach, this one still manages to score well-enough in terms of energy and general aggression that there’s more than enough appeal for fans of Swedish-influenced death metal or those who can overlook the flaws for some crushing traditional death.